We will conduct the 2020 NCA AGM by email rather then in person due to Coronavirus restrictions. The minutes are here.

A large part of the business of the AGM comprises reports. These have been emailed to members and are also available for download via the buttons to the right, along with the July newsletter.

Other than the Reports, a principal item on the agenda is the election of the society’s officers (Item 8), in particular, following Bill and Andrena's imminent retirement, the new President and Hon. Secretary, as well as the non ex-officio Committee members for the coming year.

The Committee wishes to propose Prof. Heather Cordell (Jesus, Mathematics, 1987-91) for President, and Professor Gilbert Cockton (St. John’s, History and Education, 1977-81) for Hon. Secretary, to take office ofter this AGM. Both candidates have been loyal and active members of the NCA committee, and their full details can be found in the July newsletter (opposite right or here).

Each of these candidates has expressed their willingness to serve, and, if elected, the ongoing Committee would then be as follows:

Note: the constitution states that there should be not more than seven nor less than five non-ex officio members.

We need your approval for the reports below and for the nominations to the left below.

May we ask you to send any comments or queries to Bill by Friday, September 25, 2020.

Unless we hear from you by then, we shall assume that both reports and nominations can be approved. 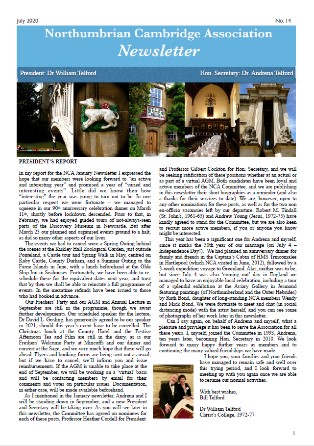